I’ve been quiet, haven’t I? Well, the eating of Thanksgiving foodstuffs took a few days. It was our first one with just the two of us, and I might have made far too much of everything. We’ve been in a food coma, taking naps, and playing video games for days. Been kinda nice, actually!

Last night was the first night we ate something other than turkey, green bean casserole, potatoes au gratin, and stuffing. I made taco salad. I wasn’t hungry at all, in fact I may never be hungry again, but the husband feels it important to eat at least one or two meals a day. I suggested we finish off the pecan pie for dinner, but he wasn’t into the idea. Said it wasn’t “healthy” or some such. Pfft!

The other reason for so much silence is the redux versions of the No Man’s Sky expeditions have started, and the very first one … Exobiology … is my all-time favorite. Naturally, I just wanted to do that and nothing else, which I did for 25 hours and 45 minutes. In between the naps and eating, of course. I started the thing knowing I’d want to keep playing the save, so I took longer than usual to get through the scenario goals. There was also a lot of time spent shambling around on planets watching sunsets and seeing pretty views, because those are both integral to my No Man’s Sky experience. My original Exobiology save is now the one hopping through galaxies (have recently arrived in #50), but I’m not sure what life mission I will give this one. Maybe I get back to base building? I haven’t done much of that lately.

Anyway, here’s my favorite moment from the expedition … contacting a space sentience. I saved it for last, because it leaves a memorable experience.❤️ 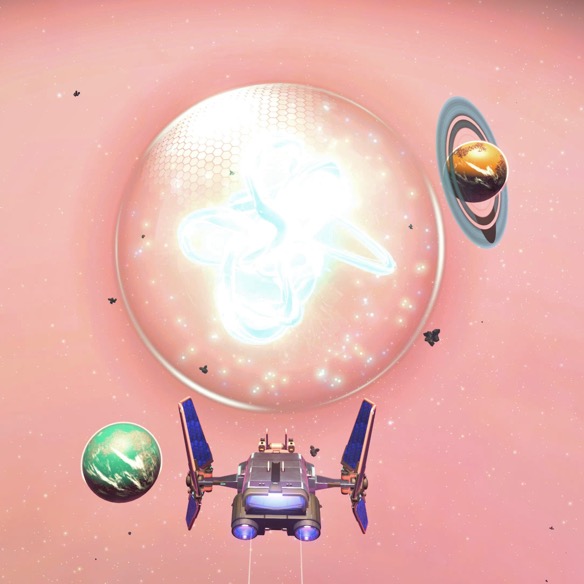 And now it’s Monday, and I have a million things I need to get done this week. I’m not wanting to do any of them, of course, because it’s impossible to get moving after four entire days of eating and extreme laziness. Holidays are great, until they’re over!

Addendum: I am still working on setting up a newsletter for all my friends who are now spread everywhere on the internet. It’s been more of a bother than expected, but I’ll eventually get it sorted out. Or I’ll find some other solution to the problem.

Giant plates of Thanksgiving foodstuffs were consumed at 1 pm. Then came the sleep. After the sleep came more coffee, with a slice of pecan pie. More sleep. Now it’s after 9 pm, well past the time we would normally be having dinner, and it appears no one is hungry yet. I’m not surprised. They really were giant plates of foodstuffs.

The weather has been utterly gross and wet today, but at least the food and sleep has been good. Maybe I’ll see if the husband wants to watch another episode of Bridgerton. We’re so close the being done with season 2!

Somehow, everything came together at the same time. I have successfully pulled off another Turkey Day feast. Also, I may have made entirely too much food, and we will be eating it for days.

Good thing it’s tasty, yes? And it is tasty! 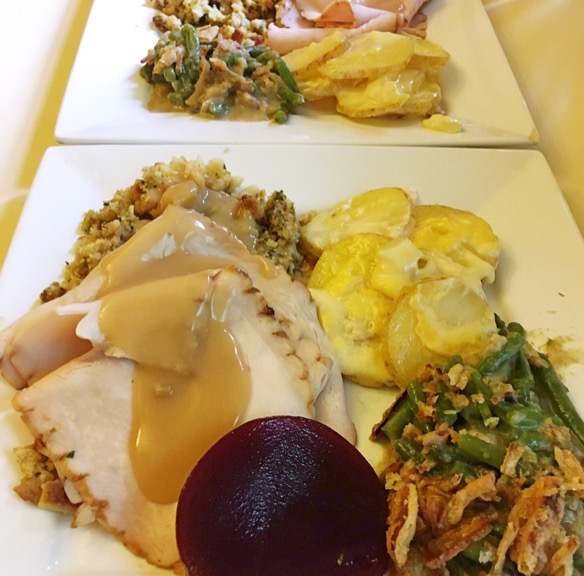 Potatoes au gratin are in the oven. Green bean casserole is ready to go in as well, in about 20 minutes. The turkey, which is already cooked (thank goodness), is not yet entirely thawed. I’ve not yet made the stuffing. Everything’s fine! I’m going to sit for a minute and finish my coffee, and then I’ll deal with the icy turkey and the stuffing. Thus far, no major problems.

Glad I did all that prep work yesterday. Allowed me to sleep in a bit today. Also, hunger pangs aside, it doesn’t really matter if we eat at noon or later in the day. It’s just us. Though I’m pretty sure the husband would prefer sooner rather than later.

Addendum 12pm: The potatoes have been in the oven for thirty minutes. They should be showing some signs of cooking, and yet they do not. Not cooked at all. The potatoes have to be half cooked before the green beans go into the oven. I’m beginning to feel hungry. We’re all gonna die.

I did though get the stuffing done. In light of the potato situation, I won’t be hopping up to do the gravy right this minute.

The turkey is less icy.

Addendum 12:30pm: And now the potatoes have gone from not at all cooked to totally ready to eat. The green beans have not been in the oven yet. Argh!

The turkey is completely thawed and ready to be heated. Phew.

Still need to do the gravy.

Addendum to the addendum: Have uncanned the cranberry sauce. It’s in the fridge, still shaped like a can. Whatever.

I think the potatoes au gratin are going to turn out fine. Edible, anyway. What more can anyone ask?

I’ve still not gotten to the gravy.

The fresh green beans I ordered were supposed to be mechanically snipped. Sure, you still have to keep an eye on them as you cut them in half, because the machines do occasionally miss a stem or tip, but overall, it’s a big time saver.

The green beans I received were not mechanically snipped. Not at all. Regular fresh green beans had been subbed without me noticing. So the whole “prep the beans for green bean casserole” stage of my day has been rather longer than expected.

I’m not done yet. Just taking a break, because there’s truly only so much green bean snipping I can stand, which is why I ordered the pre-snipped ones. Also, the skin on the tips of my thumbs hurts.

When your dreams come alive you're unstoppable
Take the shot, chase the sun, find the beautiful.Jane Zhang
justorb@justorb.com

Oops, I meant to make this followers only! Oh well, I’ll leave it. Maybe some of you folks will find it amusing. 😂

New blog post in which I search for something missing…

The Best Dress Ever | Just Orb

The husband has been working from home all week so far, because he's been sick, and today with no warning, he went back to the office. I have the whole house to myself, and my plan for the day is to load up on alone time. Playing video games, reading books, and napping with cats incoming!

Another upside to having ordered Chinese delivery for dinner last night is that I also get to not feel like cooking again tonight thanks to there being a ton of leftovers. Yay!

The annual cedar tree mating ritual has begun in Central Texas. Time to break out the antihistamines.