I’ve just received an email from Disney+ informing me that in order to continue to give them money in exchange for the ability to stream their content to my various entertainment devices I must supply them with my birthdate and gender. 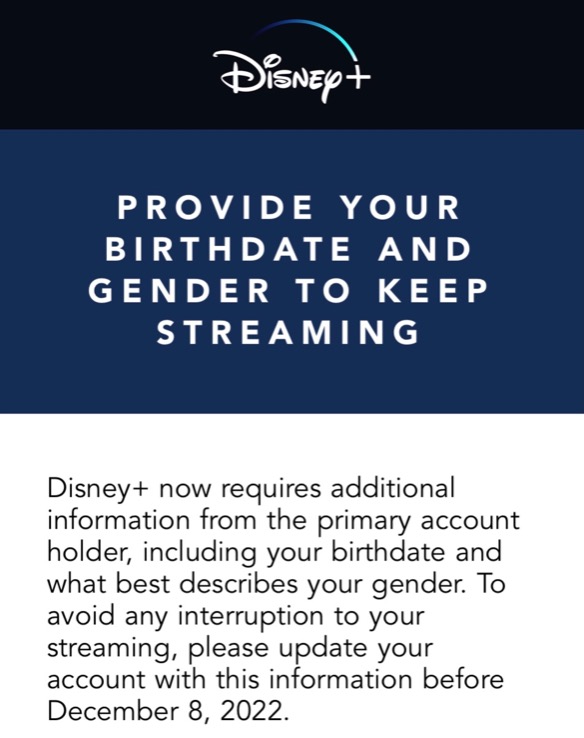 While I can imagine a number of situations where having a birthdate would be useful for a paid subscription streaming service, I cannot imagine any reason whatsoever why they would need to know a subscriber’s gender. Not just NEED to know either! No, you can’t pay them money to use their service AT ALL, unless you tell them your gender by December 8. It’s so important for them to know their subscribers’ genders, they’re willing to forgo having some of said subscribers! I doubt I’m going to be the only one questioning why they need this information in order to make pictures move on my tv screen.

In light of the other recently received email informing me they will be charging me more money soon to continue consuming their product, I suspect this may lead to Disney+ no longer being available at Casa de Orb. I love me some Disney, especially because they have Star Wars and Marvel, but unless someone can explain to me exactly why they so desperately need to know my gender, I don’t think I want to pay them anymore. Life will go on. Other visual entertainment will be consumed elsewhere. I lived the majority of my life without Disney+, so I imagine I can live the rest without it as well.

Addendum: I did find an explainer page in their help files, and yes … birthdate is useful for identity/age verification. Don’t have a problem with that. But asking for my gender to better serve me ads and supply better recommendations? I don’t care that “prefer not to say” is an option. The fact that they asked … no, they DEMANDED … this information angers me. First off, what ads? I’ve never seen ads on my Disney+ apps, and what do gender specific ads look like anyway? Also, recommending things to watch based on my gender feels … I don’t know … not great. My gender doesn’t really inform my entertainment choices? I’m posting this anyway, because I’m still irritated and the rest still stands.